Highball vs. Cocktail: A Detailed Explanation

Unless you're a professional bartender, the world of mixed drinks can get pretty confusing. Highball vs. cocktail, short vs. tall, neat vs. dirty, there is a lot of terminology to understand. 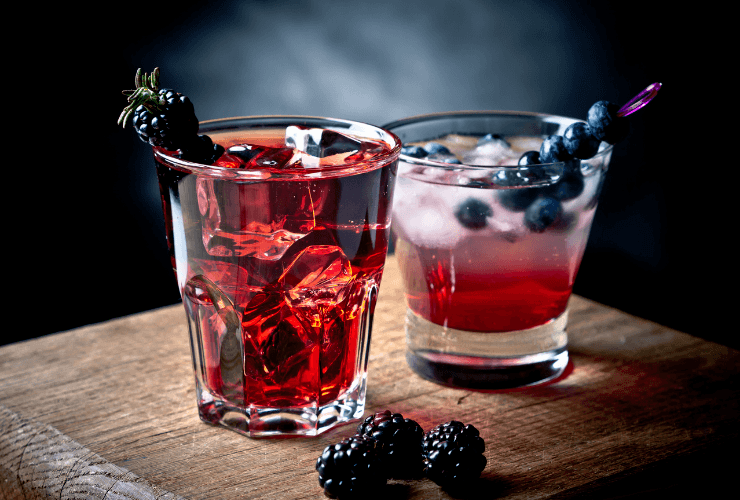 Let's start with the basics.

Highball vs. cocktail: What's the difference?

The two have similarities that sometimes get them confused, but they are two different drinks.

The origins of each drink’s name give us a little insight into the difference between them and is an interesting bit of cocktail party trivia.

There are a few different theories about where this name originated, and most of them are railroad related.

The most popular idea connects the drink to a railroad sign. If a ball was raised high on the signal post, it meant that the train could go through the station without stopping.

The idea is that much like the train could go through the station at high speeds, a highball could be made and enjoyed at the same velocity.

The name cocktail is even more fun because it has a variety of believable origins. There are plenty of stories, but these are some of the more believable ones.

The first idea is a little gross, but it was a different era.

The story goes that bartenders would scrape the bottom of the liquor barrels and mix the contents together for sale at a reduced price.

Cock was another name for spigot and the “tailings” were what was left behind in the barrels. The term cocktailings was quickly shortened to cocktail, and history was made.

The second story involves an innkeeper during the Revolutionary War named Betsy Flanagan.

Legend has it that she would steal chickens from her British neighbor and serve them to her guests. After the meal, she would serve the guests a signature mixed drink with the chickens’ feathers as decoration, leading guests to call them cocktails.

Perhaps the most believable and straightforward story is that the potent mixed drinks were made to “cock your tail,” i.e., make you walk funny.

Read Also: Best Blender for Mixed Drinks and Cocktail vs. Mixed Drink: How They're Different

At its heart, a highball is a spirit combined with a single mixer in a tall glass. Rum and Coke, whiskey sour, or scotch and soda are all examples of this popular drink option.

Highballs are traditionally served over ice. The three-step process of adding ice to a glass and pouring two liquids together make this a favorite for busy bartenders.

Unlike the simplistic highball, the cocktail is a much more involved drink. A cocktail is a single spirit or a mix of spirits combined with other juices, creams, or beverages to create a delicious combination of flavors. Cosmopolitans, martinis, and margaritas are all classic examples of a cocktail.

The two are confused so much because they are so similar and arguably interchangeable in most scenarios. A hardball is a cocktail with a limited number of ingredients. What truly sets these drinks apart from each other is not their contents but, rather, how they are served.

While the origins of the name highball are unclear, it has become synonymous with a tall glass. On the other hand, a cocktail does not necessarily have a dedicated glass in which it needs to be served.

However, specific glasses called cocktail glasses are widemouthed glasses with a thin stem in which popular cocktails, like the Cosmopolitan for example, are served.

One more aspect that sets these two apart is that a highball is always served over ice or “on the rocks.” While many cocktails are served on the rocks, it is not a requirement of the drink. Many cocktails are shaken with ice to chill the ingredients but served without any ice in the glass.

Depending on where you are in the world, a highball definition may be a little different.

While most places will be pretty lax in their definition of a highball, some areas or establishments may only recognize certain drinks as highballs. Some interpretations of highball include only whiskey and rum in their descriptions.

In Japan, the idea of the highball gets even more singular. The Japanese highball is almost always considered Japanese whiskey and soda on the rocks. Some even go so far as to say its not a Japanese highball unless it is stirred in a certain way.

There is a difference between a highball and a cocktail, but the extent of that difference is arguable.

What we do know is that a highball has many more rules than the footloose and fancy-free cocktail.

Ultimately, the name of the drink doesn’t matter as much as how much you enjoy it.

Now that you have a better understanding of the difference between the two, it is time to flaunt your knowledge at the local pub.

As an organic chemist, Janelle always preferred her drinks pure, like bottled water from the Pyrenees. That is, until a jazz saxophonist blew the doors of her taste buds wide open by introducing her to the joys of cocktails. When not tinkering with new blends, Janelle is runs a classified black-ops department of the NIH.