For connoisseurs of alcoholic drinks, there may be a nice debate going on between you and your friends: cocktail vs. mixed drink—how are they different?

Indubitably, many people enjoy both and don't care what the difference is, but it's important to know.

Here we break down the origin of cocktails and mixed drinks, as well as the contents of each, essential items you need at home to make a great drink, plus a bit of history. 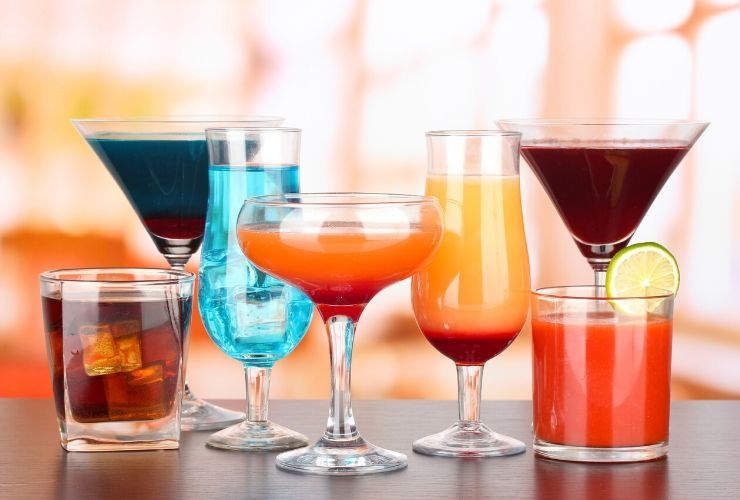 So, what exactly is a cocktail, you may ask?

By definition, a cocktail is a drink that contains several ingredients that are mixed together and include one hard liquor and one or more fruit juices.

For people who prefer a non-alcoholic version, there are virgin cocktails, also known as mocktails, that don’t contain any liquor.

Broadly speaking, cocktails follow a formula of a sugar, a bitter, and a spirit, but by and large, most people refer to a mixed drink as a cocktail.

Breaking down a cocktail

Let's take a close look at the anatomy of a cocktail.

The base of a cocktail is the spirit, such as vodka, gin, whiskey, brandy, rum, or tequila. As the largest portion of a cocktail, typically only one is used; however, there are many cocktails that do include more than one spirit.

Also referred to as the body of the drink, which "holds" all of the ingredients together, modifiers include champagne, vermouth, cream, or a light juice that works to enhance the base without dominating it.

As the smallest volume of a cocktail, the perfume can be anything like fruit, syrup, coffee, nuts, herbal liqueur or a bitter which ultimately enhances the liquor base.

When just the right amount is used, the perfume can really bring out the taste of a cocktail and its unique ingredients.

The origin of cocktails

The first definition of cocktails dates back to the beginning of the 19th century when, in 1806, cocktails were described in print as a stimulating liquor comprised of spirits of any kind, with sugar, water, and bitters included.

This depiction is the same standard used today when referring to what makes the ideal cocktail.

Before cocktails emerged, however, there were precursors to the current standard that were referred to as fizzes, slings, and juleps, all of which became popular in the 17th and 18th centuries.

These earlier drinks lacked a specific formula and primarily relied on the talents of the local bartenders to come up with palatable drinks for their intended audience.

There are a slew of famous cocktails out there, some of which include cosmopolitans, margarita, and classic martinis, but half the fun is discovering new cocktails with different names and ingredients at new bars.

To note, one of the golden rules of bartending lore is: all cocktails are mixed drinks, but on the flip side, not all mixed drinks are considered cocktails.

A mixed drink is, at its core, any beverage that includes alcohol as an ingredient. Since cocktails involve more than just alcohol, such as flavoring, this is where the line of delineation resides.  Under this definition, a martini is classified as a mixed drink, and not a cocktail.

Read Also: Best Blender for Mixed Drinks and How to Make a Brandy Manhattan

Ingredients for making drinks at home

No matter how unskilled you may think you are at making drinks, there are some simple cocktails that can easily be made at home.

In order to do so, there are some essential ingredients that you should always have on hand for your bar cart. Here's a short list of some ingredients you use with your spirits that can help you make a simple cocktail or mixed drink.

For most cocktails you will need something acidic to balance out the sugary flavors and the alcohol, which is where lemons and limes come in.

Keep a few in your fridge to use for light beers and tequila shots. You can even use a bit of rind to enhance the taste of a cocktail. Orange peels can also be used for sour cocktails.

If you have sugar on hand, you can always quickly whip up a simple syrup, which can be used in lots of drinks. You can also use sugar to decorate rim glasses or for a cocktail favorite, the Old Fashioned.

Having ice on hand is a no-brainer, as you need it not only to chill your cocktails once they have been made, but to enhance the visuals of your drink. And you can’t have a scotch on the rocks without the rocks!

Having some bitters on hand will balance out the sugar in those mixed drinks you make. Great bitters to include at home include herbs and a few concentrated extractions of flowers and plants. A few dashes of any of these will go a long way!

Now that you know the differences in the debate between cocktail vs. mixed drink, you can have a more informed banter at the bar with your comrades as you enjoy your favorite alcoholic beverages!

As an organic chemist, Janelle always preferred her drinks pure, like bottled water from the Pyrenees. That is, until a jazz saxophonist blew the doors of her taste buds wide open by introducing her to the joys of cocktails. When not tinkering with new blends, Janelle is runs a classified black-ops department of the NIH.