How to Make Your Own Beer Recipe 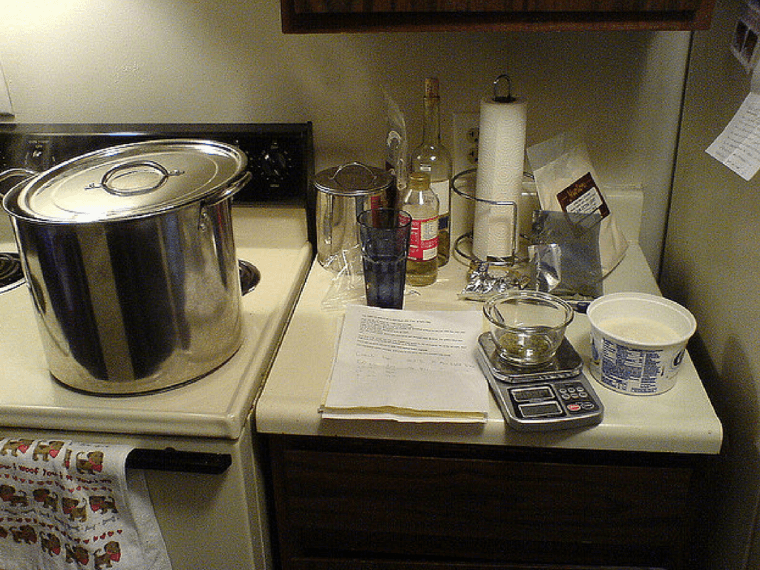 Brewing and bottling beer from the comfort of one's own home is the dream of anyone who has opened their wallet one too many times to pay a bar tab or pick up a 6-pack at the local variety store.

Using recipes compiled by professional brewers or fellow home artisans is a good way to build up your confidence and hone your skills, but how do you progress beyond simple imitation?

By designing and making your own beer recipe, of course!

Learning how to make your own beer recipe involves a ton of personal research, intimate knowledge about different styles and ingredients, and a clear vision of what you what to achieve.

Here are a few important steps that should be adhered to during your beer recipe creation process.

Know what style you're aiming for

Many amateur beer manufacturers lose sight of the forest for the trees; in other words, they get bogged down in the details of their recipe and forget the overarching goal that they initially were striving for.

Unless you have a particular style of beer that you're aiming to brew, like an American Pale Ale or a German Weissbier, it will be difficult for you to avoid stepping on your own toes and combining too many different ingredients in the recipe.

Choosing a particular style of beer sharply narrows the array of ingredient options available to you, and should sharpen your focus on the taste and texture that you want to achieve. The Beer Judge Certification Program Style Guidelines offer a detailed look at the ingredient breakdowns and percentages for hundreds of different beers, meads and ciders. Make sure you check it out before crafting your own recipe.​

At the basic level, beer recipes are merely a list of different combinations of four ingredients:

The choices that you make in the ingredient arena will largely dictate the taste of your beer.

Let's take a closer look at the four categories. Malts are used to add flavor to beer. Along with hops, they are the main flavor injectors, as water and yeast have little sensory or aromatic impact.

There are likely hundreds of different malt varieties, but only about twenty or so are regularly used in brewing.

Every malt variety accomplishes something different within the beer: Munich malt and Vienna malt are both considered to have a bready, true malt flavor, whereas black patent malt has a sharp flavor that is often used to bulk up porters or stouts.

Typically, beer recipes combine two to three different malts that work well in tandem together to create a flavor profile.

For instance, the combination of black patent malt, chocolate malt and roasted barley is often used to develop the profile of a full-bodied American chocolate stout. Other grain ingredients, such as carapils, do little to affect the beer's flavor profile or color and instead improve the body and head on the beer.

Researching popular grain pairings when learning how to create your own beer recipe can give plenty of insight into useful combinations and ill-fated experiments.

Beer brewers love to talk about beverage complexity, and although some of a beer's complexity is derived from its malts, the remainder is solely the responsibility of hops. Again, with hops as with grains, it is important not to deluge the beer with conflicting or confusing flavors. Even the hoppiest West Coast India Pale Ales typically only employ four types of hops, so decide what flavor you want and stick to hops within that bitterness profile.

Hop availability in your area is also a pressing concern when you are home brewing in a somewhat remote or inaccessible region (or in a place where hops are not grown or easily importable).

A handy tool for home brewers is a hop substitution chart, which details what type of hops can be substituted for well-known varieties like Columbus, Cascade and Centennial, Brew365 has an excellent tool on its website to help amateur brewers with companion and substitution choices.​

Your water should be clean and filtered, and your yeast, just like your other ingredients, should complement the type of beer that you're making. Liquid yeast and dry yeast are both sold for home brewing, and there are many subcategories within these main categories.

Essentially, do some research on the flocculation and attenuation of different yeast varieties and be flexible with the outcome. Making the same beer recipe three times with three different types of yeast will change the flavor each time. Be patient, and make sure to taste test!

Getting the ingredient percentages right is one of the most difficult parts of creating any recipe, and until your palate is sufficiently developed, it may be difficult to ascertain which ingredient is too strong and which is too weak.

Reading beer recipe instructional tomes such as Ray Daniels' Designing Great Beers can help you learn how to design your own beer recipe by showing you classic ingredient combinations along with more interesting ruminations on the brewing process for different styles.​

Once you are familiar with several different types of malts and hops, the process of how to make your own beer recipe begins to simplify and refine. For an IPA, you'll use Cascade hops for bitterness, a Munich malt for a bread-based fullness, and a Carapils for head retention. Add in the yeast (usually 029 or California 001), malt extract to raise the alcohol level, and water—and that's your recipe!

Recipe creation, like mathematical equation writing or musical composing, is an art based in science.

Boundless curiosity combined with attention to detail and methodical patience is the best way to approach it​.

Professional jockey Jose always liked to kick back after a training session with a high-strung thoroughbred, but he'd never indulged in beer until the raven-haired owner of his most challenging mount slid a beer to him from across the table. One sip of the ice-cold, frothy pale ale and Jose was lost. Now married to an heiress, Jose works as a sports journalist and collects cars.